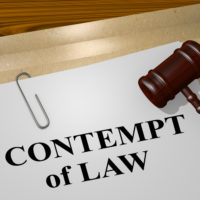 Some people may recall Kim Davis, the former Rowan County, Kentucky clerk. In 2015, she refused to issue marriage licenses to same-sex couples. As a result, a judge put her in jail, not because of her religious beliefs, but because she refused to obey a lawful order from the United States Supreme Court.

U.S. District Judge (and the son of former Major League pitcher Jim Bunning) David Bunning’s jail sentence was for contempt of court. Public officials are not the only people who can be punished in this way. Everyday people in Maitland may be held in contempt of court as well.

Typically, judges issue civil contempt orders for failing to follow a lawful court order. Many times, that order involves the payment of child support or another family support obligation.

In terms of enforcement, the obligee (person receiving child support) has several options. Some of them are designed to capture the obligor’s attention, and others are designed to generate money immediately. Common options include:

As mentioned, if obligees work with the Attorney General, a government lawyer decides which approach is best for a family. If you work with a private Maitland family law attorney, the obligee makes that decision.

Nationwide, less than half of obligors receive the full amount of child support they are entitled to pursuant to court orders.

In the family law context, most people are in criminal contempt of court if they violate protective orders.

That violation could be at the heart of the order. For example, an ex-spouse might physically assault someone who is covered by a protective order.

Other protective order violations could trigger criminal contempt charges as well. For example, the person could refuse to move out of a residence or try to alter the children’s enrollment status at daycare.

In both civil and criminal contempt cases, Orange County judges usually give people an opportunity to comply before handing down contempt orders. In most cases, that’s really what everyone wants. In delinquent child support situations, most obligees do not want the obligor to go to jail. They just need the money they are owed.

Dangerous violations of court orders, such as secreting the child away from the other parent, are an obvious exception to this rule.

Work with an Aggressive Lawyer

If one party refuses to follow a court order, the other party has legal options. For a confidential consultation with an experienced Maitland contempt enforcement attorney, contact The Troum Law Firm, P.A.